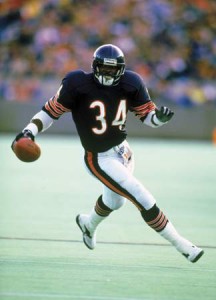 The late Walter Payton of the Chicago Bears, one of the best football players to ever play the game, had one of the most intense training regiments in all of competitive sports. Every day in his off-season he would come to a certain steep hill in Arlington Heights, Mississippi and sprint up it as many times as he could handle. Each day he was compelled to do run the hill more times than the day before. Word in the athletic community got around about Walter’s conditioning and how he managed to run as hard as he did and never really get tired.

Watch the YouTube Video – Walter Payton and The Hill

Teammates and other football players would come down to Mississippi to take their shot at the hill. Even track athletes were left in Walters dust on that hill. Even though Walter was just as impressive in the gym as he was at hill sprints, there is a reason the image of Walter running the hill has become so infamous and is still played on the NFL network and sportscenter today. Everyone has their “hill”.

As some of you know, I like to ride my bike to work. I go from the bottom of 208th south down to downtown Langley and back almost every day. The first time I did it, it took me 45 minutes and 3 months later I’m down to 25. That’s my hill. Every day is a new challenge against myself to push harder, keep improving. The hill is my progress tracker.

Everyone has their hill, be it the Sun Run, the grouse grind or Dave’s 7 minute plank.

Thanks,
Kurt Baker
The Bootcamp Effect